In front of the roused gathering, LaPierre proposed, “we arm the 6th graders to defend their grade school classmates. Arm 8th graders in middle school and seniors in high school.” NRA sponsored defense and arms safety would be part of a new school curriculum, maybe even displacing physical education. “Fuck kickball when lives are at stake,” LaPierre said.

When asked by some knucklehead fake news peddler how proliferating more guns,  especially to those too young to drive or buy cigarettes or pornography, might solve rather than worsen the problem, LaPierre offered, “It’s about safety and teaching responsibility. We tell kids not to eat poison or excrement and most don’t. We can tell them not to shoot themselves or each other and they won’t. It’s the liberal socialists who always wanna coddle us and think they can save us from ourselves.”

When pressed about how this might affect his proposal to arm schoolteachers, LaPierre stated there’d be no change. In fact, arming children only adds another layer of protection and defense.  “Let’s say one of our armed teachers switches up or goes off her psych meds and goes a little zany. Or Mr. Jones, the physics teacher, discovers his wife’s been fucking around on him and he loses his shit on a Monday morning while he’s packing. Who’s gonna stand up?” LaPierre went on before the frenzied crowd, “And who’s gonna defend against the armed football coach who’s fucking around with the cheerleaders? Little Susie and Little Johnny, that’s who.”

But not everybody seems abroad, like Senator Ben Cardin (D-MD) who claimed Friday, “this is just the same old more and more guns is the best defense against guns rhetoric we’ve heard for ages.”

Colorado Republican Rep. Mike Coffman responded to LaPierre’s suggestions at a town hall Friday night, “I’m intrigued by (Wayne LaPierre’s) proposition. There might even be some room for college credits in there somewhere.” Coffman added that folks should go back and watch Red Dawn if they want to see examples of the effect and efficiency of arming our children. When asked by town hall attendee Maxine Rendell how such a cockamamie idea even gets started, Coffman replied, “Cockamamie? Like how? It’s not like kids would be given rifles with bumpstocks, for Christ’s sake.”

Back in Maryland, Toddy Allen, a professed NRA member of 20 plus years, said his son “plays Call of Duty all night long and hasn’t killed anybody in real life yet so I can’t see any problems with what (LaPierre’s) saying.”

And in a desperate attempt to remain relevant, former professional devicivist and shit stirrer Tavis Smiley weighed in from his socio-political exile just offshore of Rikers Island with a Tweet, “So the inner city kids gonna get Hi-Points that jam up all the time while out in the suburbs they’re getting Colts and Springfields. Just watch. That’s how this is gonna play. #nohi-points”

– mrobins71 “The finest in fake news” 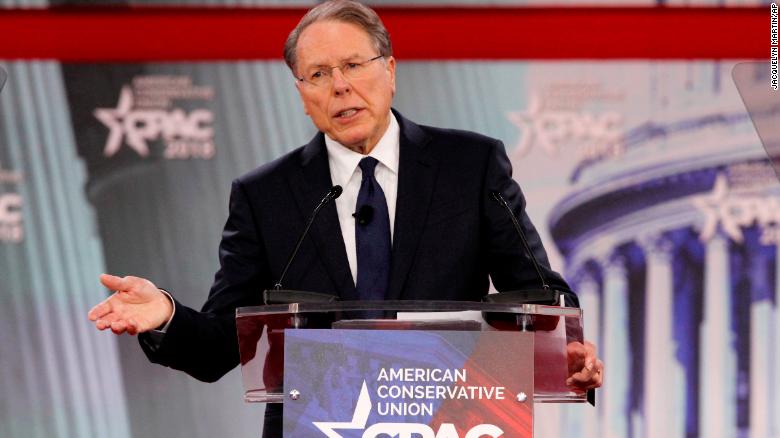