“WASHINGTON — Facing mounting government pressure and a public backlash over an epidemic of teenage vaping, Juul Labs announced on Tuesday that it would suspend sales of most of its flavored e-cigarette pods in retail stores and would discontinue its social media promotions.” 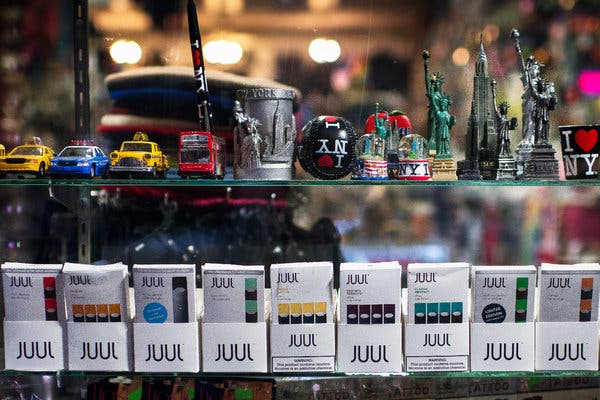 Popular e-cigarette and vape flavors like Bubblegum, Cotton Candy, Mango, and Crème are the frequent targets of critics who say the products are being directly targeted at teens.

Mrobins71 contacted Juul Labs chief executive Kevin Burns who said they’re listening and will pull all “kiddie” flavors from retail by the end of the year. “We’re looking to replace with more adult alternatives,” Burns said.  “We’re especially excited about Pussy, Ass and Cock.” Burns later clarified that these are separate flavors, not a combined flavor. “We’re calling those the Anatomic flavors. Medicinal flavors include Pink Pepto, Minty Mylanta and Menthol Vick’s Vaporub. When it comes to foods, we’re looking into Kosher Liver and Onions, Lightly Sauced Brussels Sprouts and a few vegan options, including Vegan Black Bean & Corn Quinoa.”

Asked if there was any concern that Pussy and Cock flavors might be too gender specific, Burns said they’re prepared for that inevitability with an “ambiguous genital” flavor in the works.

Mrobins71 noted the unease of vaping Cock, stating that it might be a wonderful flavor but that, as a straight male, there’s a weird anxiety to putting anything penile-related to his mouth.

Still, not everyone’s in favor of the progressive changes in vape flavors. Vic Raschke is a 64-year-old retired oil rig engineer living in Raymond, California. He’s been vaping Bubblegum and Tutti Fruity juices for over 5 years, noting how it’s helped him kick a 2 pack-a-day cigarette addition as well as “slay tons of teenage twat who see me as a cool, silver haired wolf.” Vic was quick to clarify that he meant 16+ year old teens. When asked if he ever attempted to seduce a high-schooler with Mango or Bubble Gum vape juice, Vic replied with a sly wink.

Regarding his personal choice of vape flavor, “(Bubblegum) is my favorite, without a doubt. And I’ve had to overcome a lot of stigma for not just vaping by itself, but for vaping a kid’s flavor on top of that. I don’t wanna lose that maverick identity that I worked so hard to build. I lose Bubblegum (flavor) and I lose a part of who and what I am…..of what built me into the man that I am today.” Vic heads Freedom Fighters for Flavor, described as an international activist movement that brings choice to ethical vaping. Currently, it consists of only two members, Vic and his dog Waylon.

“This is how you lose your freedom,” Vic says. “It seems innocuous to sacrifice Bubble Gum and Mango juice now. But then in ten years you find yourself with no options but to vape but Vanilla Kaopectate or Sardines in Mustard.”

Vic goes on to explain how it’s a similar conspiracy that popularized “negro” as the popular way to describe African Americans.

“It starts with negro and then you turn around and you can’t even say nigger anymore. That’s what I call a loss of freedom. We’ll loose Bubble Gum vape juice just like we did nigger in popular vernacular and before you know it there ain’t no turning back. Orwell and Huxley are spinning in their graves right now.”

Vic went on to make another tired analogy, this one to guns. “It started with banning amour piercing rounds. Now they wanna take away my AR-15.” Vic then raised is vape brick to exclaim, “from my puckered, chapped lips!!!!”

Noting the parroting of conservative actor and activist Charlton Heston’s stance on political correctness and firearms, mrobins71 asked Mr. Raschke if he held any unique political beliefs, to which he replied, “I see what you’re getting at but as far as I know, Mr. Heston never said anything about chasing jailbait – whereas I’m a clear advocate – hence, clearly independent.”

Asked if it’s not at least a bit unethical for an elderly man to be creeping on teens, Raschke replied, “I’m fighting for your liberty, asshole. Why you got to be such a whiny, libtard, Communist, unpatriotic weasel?”

We here at the blog note that it’s odd how kids in most states are legally able to fuck an adult like Vic or be put on trial for murder at 16 years old but can’t purchase an e-cigarette at 20.*

It seems that being against something…sometimes anything….is all we need to get attention, whether it’s vaping (as opposed to GODDAMNED CIGARETTES!!!), gender/genital specific flavors or chasing teenage tail.

* From the Wiki on Ages of Consent in North America:

“The federal law establishes the age of 12 as the minimum age of consent, while the age at which there are no restrictions for consensual sexual activities is 18 (sex with someone 12–18 is not illegal per se, but can still be open to prosecution under certain circumstances).”